As mentioned in Part 1 of the journey, I was not sure exactly what to expect out of Yellowstone. Upon entering the park, I realized the great diversity in landscapes, habitats, and animals. One part of the park had the ability to look completely different from another part of the park. There were mountains, valleys, canyons, rivers, waterfalls, lakes, areas of geothermic activity (I have more to say on geothermic activity in a future post). It was all beautiful in its own kind of way, but my favorite scenery was Trout Lake at sunset (first picture below). It was spectacular and surreal. High elevation lakes continued to be one of my favorite views throughout the trip. Meadows were a close second if not a tie. 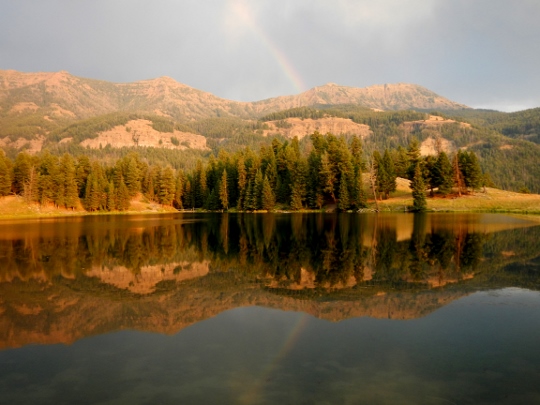 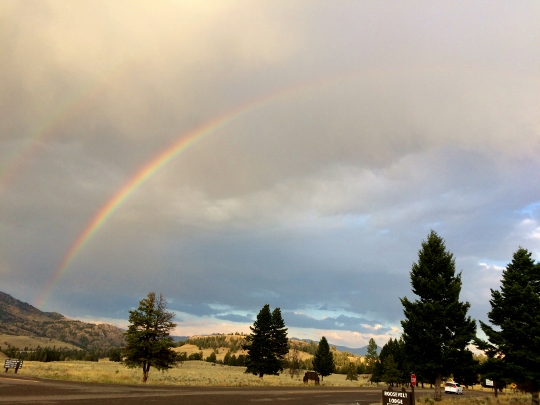 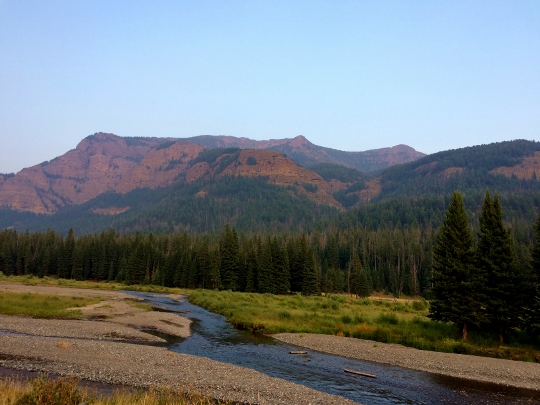 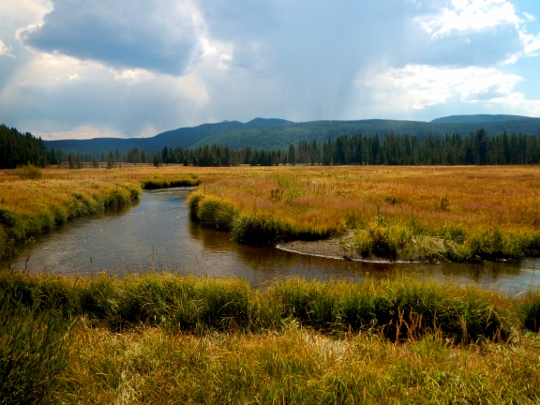 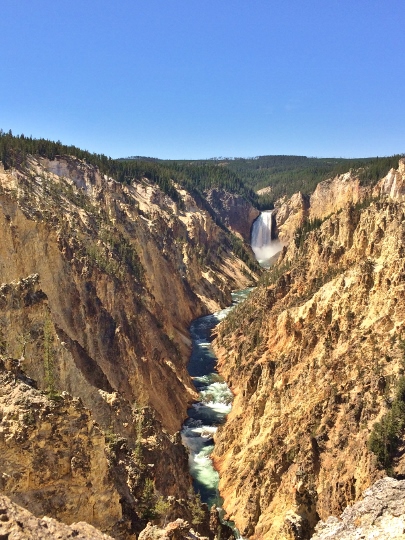 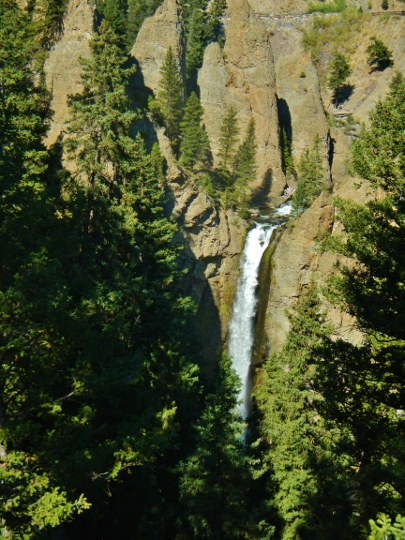 Not only did the geology of Yellowstone vary drastically, but the weather did too. Before heading to Yellowstone, David reassured me that although it would be chilly at night, it would be a “dry cold” and would not feel all that cold. It felt cold. As soon as the sun went down, I braced myself for about 12 hours of misery. Perhaps I am being dramatic, but I'll let you decide with the following pictures. This was taken in August! August!!! First for me! Although beautiful, we fortunately camped just a little lower in elevation than this. It was a close call though. 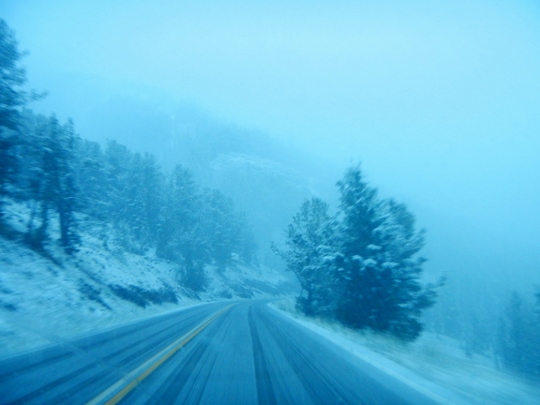 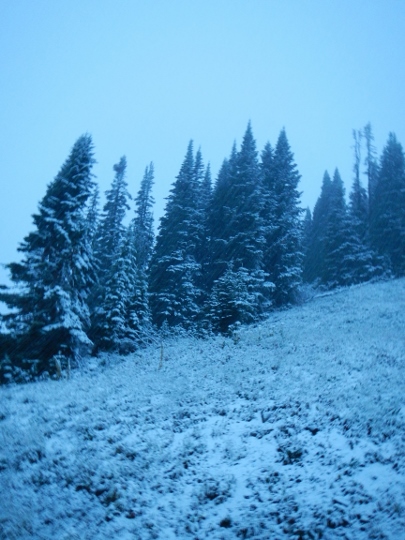 Although each night was spent with some level of discomfort, the days made it well worth it! Some days we spent more time driving around looking at wildlife and scenery. Other days we spent hiking and fishing. Our search for wildlife yielded many good sightings. Some sightings were easy. For example, there were bountiful herds of bison. Bison in a field. Bison in a river. Bison on the side of the road looking in your window. Bison in the middle of the road creating up to two mile buffalo jam. Grown bison. Baby bison. Bison. Buffalo. Bison. I'll share a good buffalo story in an upcoming post. 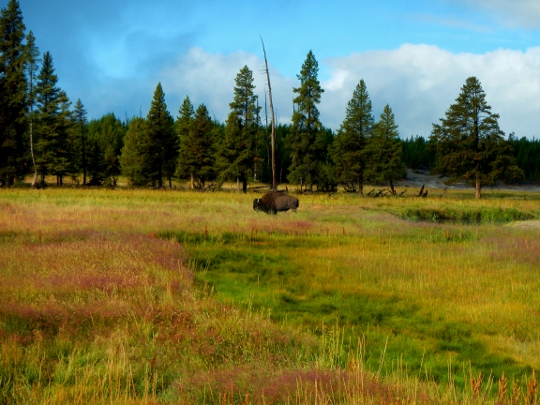 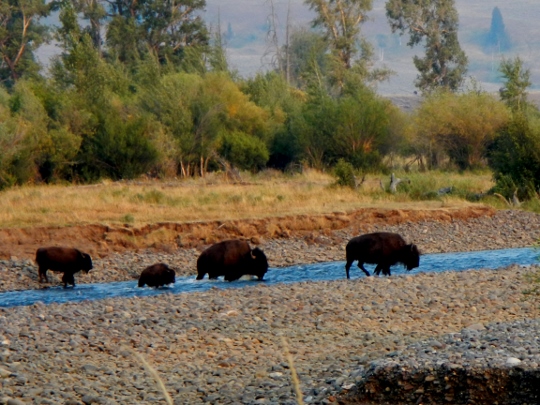 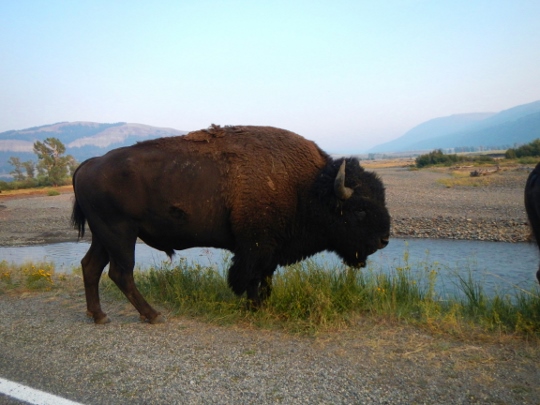 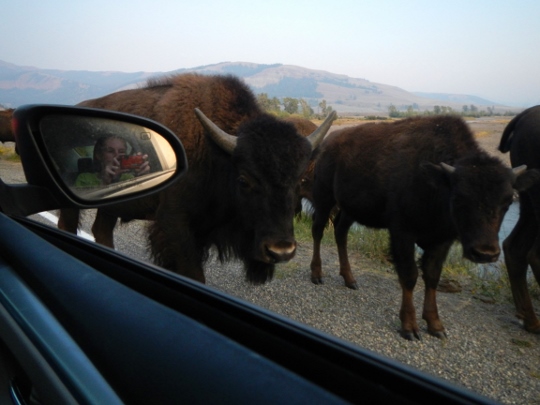 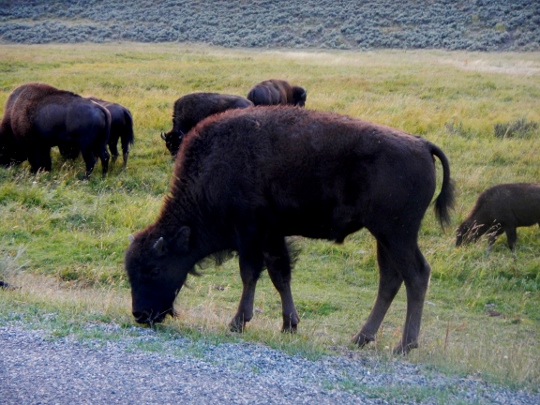 Another common sighting was pronghorn antelope and elk. 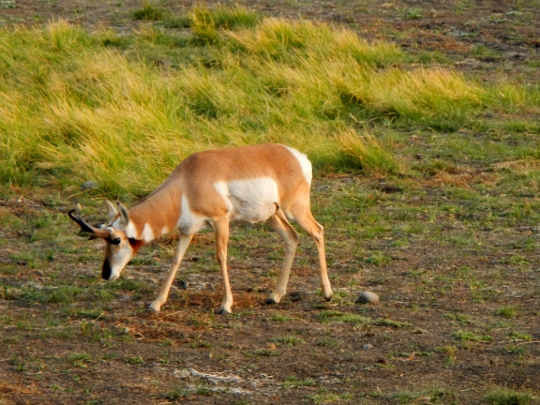 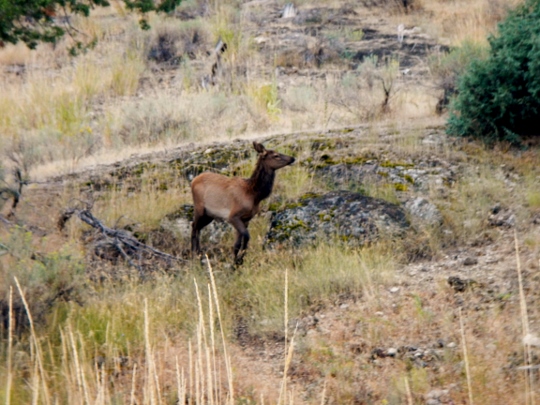 And check out this handsome coyote! 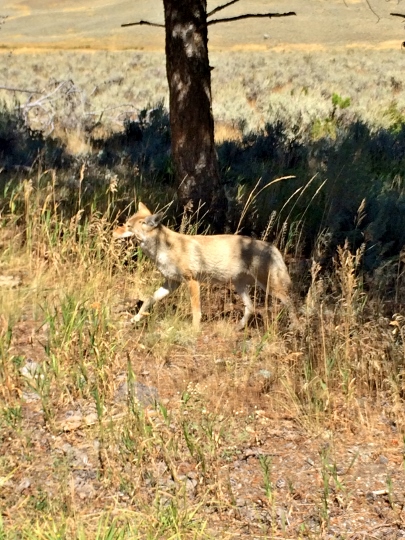 And this elegant pair of trumpeter swans! 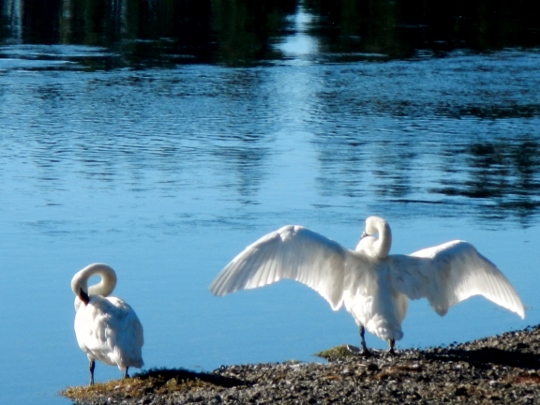 Then there were other really common sightings such as ravens and red squirrels. I think they were pretty fantastic though. I had not seen ravens before and could not get over how big they were compared to crows. And squirrels...squirrels are always fun. 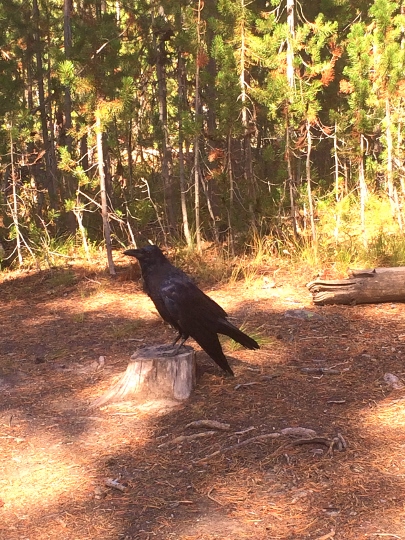 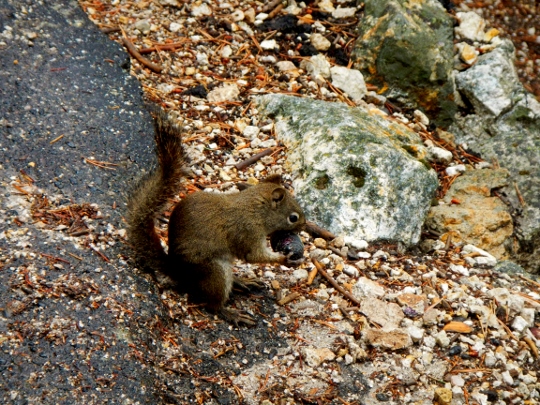 Other sightings were more difficult and/or too far away to capture without an expensive, fancy camera. The best sighting was wolves! The first wolf sightings were so far away. Even with binoculars, they looked like black blobs moving. One particular evening, however, we got a special treat. We were driving through the Lamar Valley looking for wildlife with our friends Michael and Julie. Michael got a tip-off from a wolf watcher (the kind with the nice scopes) that a pack of eight wolves were heading down the valley. We took off racing against nightfall. We parked near the river where the wolves would hopefully cross. Indeed, we got the chance to see a few of the pack members cross. They were mostly black wolves, but a gray wolf was also spotted. Through the binoculars we could tell just how big of puppy dogs these guys really were. It will remain a fantastic memory.

Wolves are cool, but what people are really afraid of in Yellowstone are the grizzly bears. I'm pretty much not afraid of our black bears here in Tennessee, but I had lots of questions about grizzly bears, their aggressiveness, what to do if we saw one, what to do if attacked, etc. The reality that we were in bear country really set in on our Pebble Creek hike where we saw trees with claw marks at least six feet high. It was then I began rehearsing our action plan in worst case scenarios and became more eager to chime in with David as we walked calling, “Hey bear!” 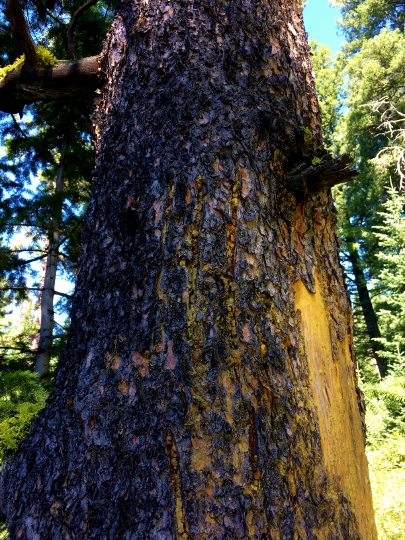 We never did see a bear out hiking. We really did not see much in terms of large wildlife while out hiking with the exception of a large bull elk who spooked and switch backed up a hill in front of us. We did see wildlife from the road, including grizzly bears. Again, Michael was responsible for giving us a tip-off on a grizzly location. Twice we drove to where the kill was to see the bears. The first time we saw one bear. The second time we saw two bears where the second was biding its time until it had the opportunity to get in on the action...or lack thereof...it was a dead bison after all. Again, lack of a fancy camera prevented a good picture, but here you can somewhat make out a bear through my phone and binoculars combo. 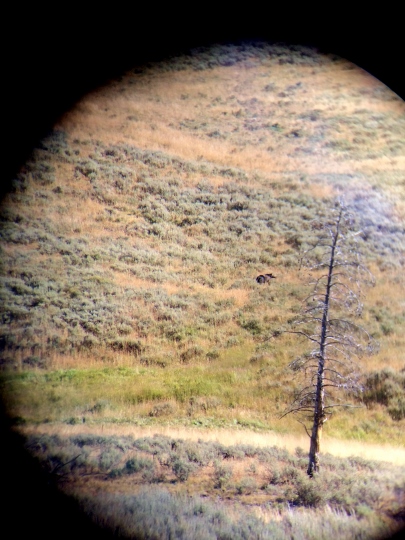 Now back to some other common sightings. As I mentioned, we had the opportunity to do some hiking while in Yellowstone. A common sighting on these hikes was David fishing of course! 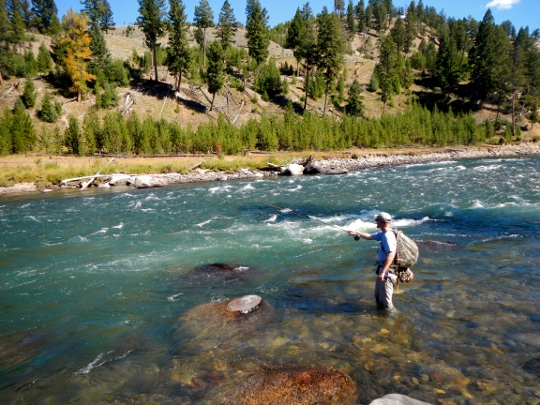 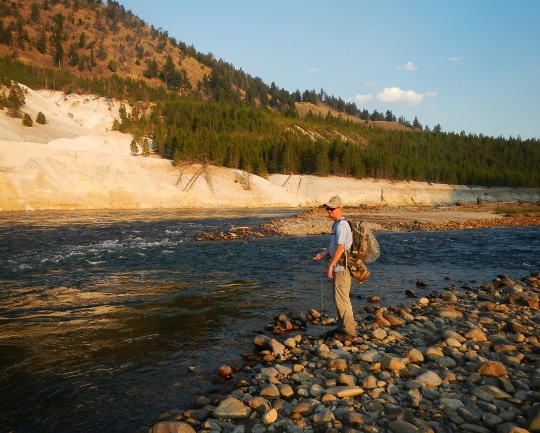 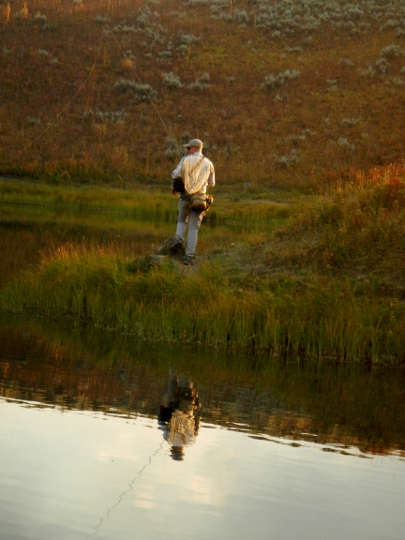 I did some fishing as well. In fact, I may have even experienced my first disappointment over a missed fish. We were fishing on the Yellowstone River and I had the biggest fish I've ever caught on the line, a Yellowstone Cutthroat. I was listening to David as he tried talking me through the fight. Things such as "let it go!" "reel! reel! reel!" "let it go!" Then I heard David say some words. I didn't know what was happening, but all of a sudden the fight was over and there was nothing on my line anymore. Apparently, an even bigger fish came and got on the line also and they both broke off as a result. It was a sad moment. I did enjoy the fishing over all though. Of course, I'm never as passionate about fishing as David, so I would often just watch, look around at flowers, critters, etc. For example, I found myself intrigued by this bee and flower. It was on there as we passed by and still there when we headed back again at least an hour later. 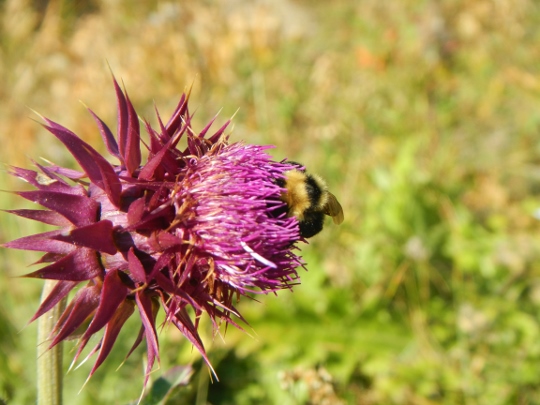 David also found what we believe is a horn of some sort. 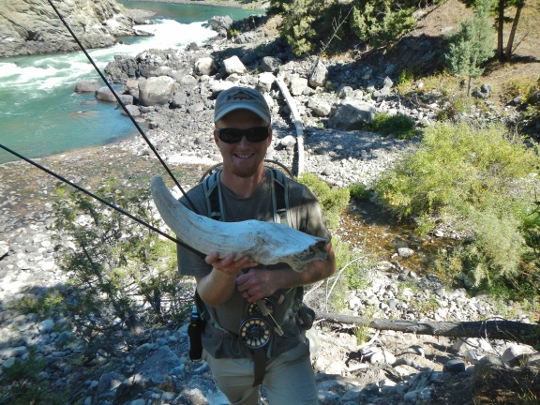 So many more animals and sights were enjoyed while we were out exploring and driving around that were never documented and have simply started fading out of memory unfortunately. In my next post, however, I will share some other memorable sights and events that won't leave the memory too quickly.
Posted by Leah Knapp at 8:01 PM