We spent our first night in Yellowstone in Canyon. We would return here often for supplies, the occasional shower, and most importantly huckleberry ice cream. The rest of our two weeks in Yellowstone, we camped at Norris where each morning we were greeted with the pungent smell of rotten eggs...that is sulfur emanating from the Norris Geyser Basin. 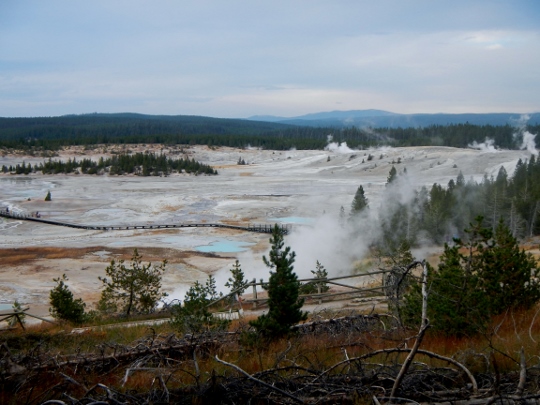 One Sabbath morning, as the sun started to peek into our campsite, I was awakened by a peculiar noise. In reality, it sounded like heavy breathing right outside my side of tent. I refused to accept reality and constructed a story in my head that the noise was actually not right outside the tent and that it was actually someone airing up an air mattress at a nearby campsite. Reality and my more “logical” explanation battled each other in my mind for several minutes. Then my mind had a funny way of rejecting the logical and reverted back to believing it was heavy breathing...and perhaps some heavy walking. I sat up to get a better listen. David stirred awake and said, “what is it?” “I hear something” I casually stated. David sat up. He heard my reality and swiftly but quietly began unzipping his side of the tent. He then told me to quickly and quietly exit on his side as well to enjoy a special treat. There it was, a big old bison eating some grass no more than 20 feet away. 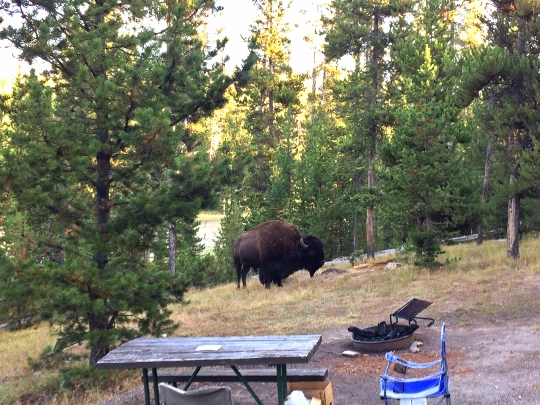 I was so excited and relieved (I started putting the bear spray in the tent after this, however). He gracefully disappeared behind some trees, and I had no expectations to see him again in this manner; however, our pet buffalo came again the following Sabbath and peacefully grazed through our campsite. He became our special Sabbath buffalo. This second appearance was noted by others as well. Some moments you wish to keep to yourself. One older gentleman stopped by to take some pictures. Without permission he wandered through the campsite, taking pictures and chattering away, closed-mouth, mumbly, southern accent intact. He stated that, “Buffalo meat's the best meat there is. I got a friend who raises buffalo. Best meat there is. I'm from Chattanooga, Tennessee...” Of course! How did I not predict this! I was glad to have him on his way, but did find it entertaining to meet a fellow Tennessean even if we did have different perspectives on the usefulness of buffalo.

The buffalo was not the only disturbance of my sleep that I had. About a week into camping at Norris, in the middle of the night, in a dreamlike stupor, I became vaguely aware of a roaring noise. It sounded like a jet, but the jet noise did not fade. As with the buffalo, I tried to come up with logical explanations in my head as I became more lucid. Perhaps it was a jet and I was dreaming and unaware of how little amount of time had passed. Perhaps it was a vacuum cleaner? That didn't make sense. In all honesty, I was slightly annoyed that I had to be awakened and thus aware of how cold I was. The noise kept on. I whispered to David, “What is that noise?” No reply. A whispered louder, “What is that noise?” Still no reply. I groaned and whined a little, “Whaat is that nooisee?” No reply. I thrashed and flailed about hoping to gain some attention from him. No reply. He never woke up! I was fairly awake by now and decided that Yellowstone was probably erupting, and there was not anything I could do about it, and if it was something else, David sure wasn't going to help, so I might as well go back asleep. The roaring faded as I drifted back into a shallow slumber.

The next day, I groggily recalled the event. I was unsure if it had happened or not. David of course had no recollection of hearing anything. We wondered at some point if it could have been the nearby Steamboat Geyser erupting. As we departed a week later, we stopped by the Norris Geyser Basin that houses Steamboat to check on our theory. We saw that Steamboat had erupted even more recently than the event I had experienced, which did not rule it out yet. We talked to a ranger. I asked him would I be able to hear it a distance away. He said, “Oh yes! It is very loud. Like a jet.” For further confirmation we did find the other past eruption dates. Indeed! I had heard Steamboat erupting. What makes this special is that Steamboat is the world's tallest geyser shooting up to 300 feet in the air, and unlike Old Faithful, it's eruptions are not predictable. In fact, years may go between eruptions; however, in 2018 a new record of 32 eruptions was set and has since continued being more active.
Basically, I had heard Yellowstone erupting in a sense. I'm thankful it was just this geyser. Here's Steamboat fuming.

In an earlier post, I stated I would discuss geothermic activity more. Although hot springs (i.e., boiling cauldrons of sulfuric acid) and geysers are a main attraction of Yellowstone, I have to admit that I was not a huge fan. In addition to the obnoxious odors, I couldn't help but think it was all a bit creepy. After all, David had told me stories about people being disintegrated in the hot springs. It was beautiful in a lot of cases, however. 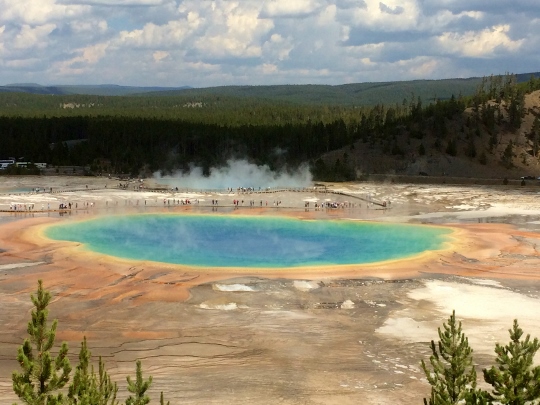 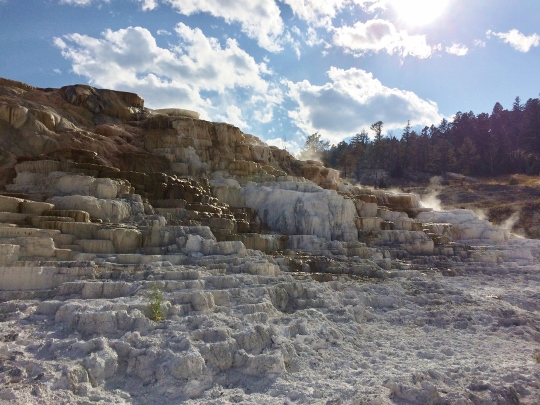 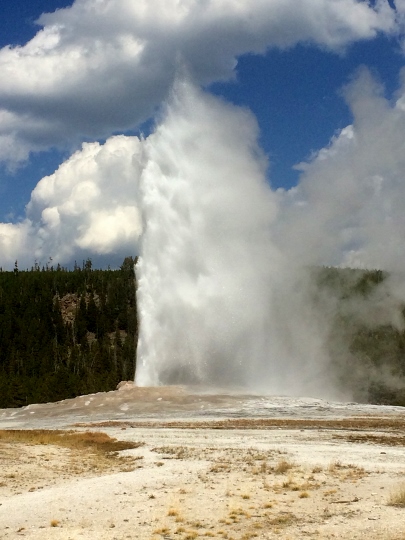 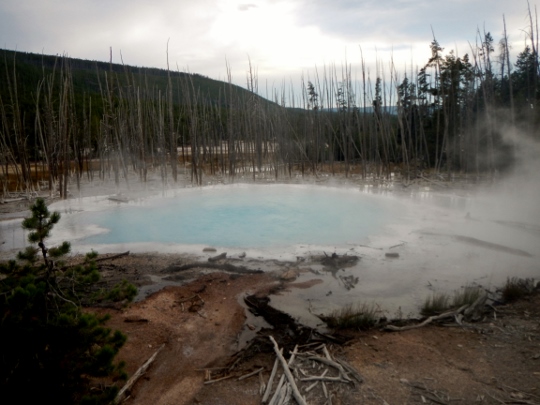 The great thing about Yellowstone is that there were so many opportunities to explore and have adventures in nature that were vastly different than other places such as Tennessee; however, not all adventures were nature-made. As one may expect, toilets are a bit scarce, especially ones that flush. In restrooms that had flush toilets, I was amused by signs instructing users to not squat on the toilet. I understood that there were a lot of visitors there from other countries, but surely it was understood that you don’t stand on the toilet. I tried to imagine the acrobatic feat of folding my tall lanky American body into squat position all while being perched up on top a toilet. Inconceivable for me! Quite the feat for someone more flexible. Surely those signs were not needed, right? Not to mention, there were no squat toilets around to confuse anyone, right? Well, one evening after driving a ways, we both had to use the bathroom pretty bad and stopped at the Mud Volcano. David went into one pit toilet and I went racing to the one next to it, only to be greeted with a shocking sign on the outside. Could it be? I cautiously opened the door. Sure enough. I go racing back to where David was and asked him if he was almost done. He asked what was wrong, and I exclaimed that I did not know how to use the one next to him. We both were amused and had a good laugh. It was the only one I saw there in Yellowstone, which is also amusing. 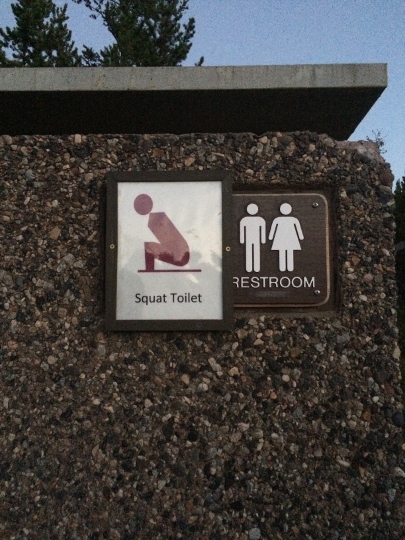 Posted by Leah Knapp at 6:12 PM No comments: